Okay, so I folded. I'm back to rocking him to sleep for the most part. But he's is taking at least two, sometimes three, hour long naps a day. I hope I'm better at sticking to my guns when he asks for a car in sixteen years.
Posted by Jenni at 8:32 AM 2 comments:

The Battle of the Nap continues!

Still refusing to nap, we've moved on to a new method: cry-it-out, or CIO. And it is awful. I've always said I would NEVER let Oscar just cry himself to sleep. I've always thought that CIO was mean and sad and heartbreaking. And I still kind of feel that way, but nothing else was working and I really have been feeling like I'm at the end of my rope.

The friend we visited with on Thursday's 15-month-old was a problem sleeper and she ended up using CIO. So, when he's clearly drowsy (thumb sucking, red eyed), I've been putting him down in his crib with his counterpiller (a stuffed caterpillar with numbers on his feet) and leaving him. I shut the door and turn the monitor on, but all the way down so I can that he's crying, but not hear it. I've decided 30 minutes of crying is my limit, so if he cries for that long, I just go and get him. But, we've CIO for naps three days running and only once have had to go get him. And, he's crying less each time I put him down. And, he's sleeping for more than 10 minutes at a time. He's still not napping like he should, but it is getting better. We're going to stick with this routine for at least another week and see how it goes. Wish us sweet dreams!
Posted by Jenni at 10:27 PM 3 comments: 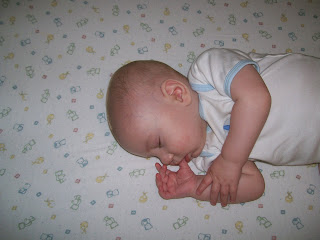 This week, little Mr. Crankypants has been refusing to nap (hence the name, Mr. Crankypants.) This presents several challenges: difficulty getting through dinner, post bath meltdowns, complete and utter exhaustion by 6:30pm. And I'm talking about Mommy and Oscar. The only plus is that he's sleeping from like 6:30pm - 7: 30am, waking for a feeding, then sleeping again until 10:30am. I'm not really sure what to do to get him to take naps. Probably I should not let him go back to sleep after he wakes at 7:30, but I am so exhausted I can't help it. I feel like I'm a better mommy when I'm well rested, but the fact that he doesn't take a nap all day long burns me out. I've always let Oscar go at his own pace. I've followed his lead with sleeping through the night, starting solids, tummy time, etc. But no nap is simply unacceptable. I'm just not sure what to do at this point. I really just want his naps to develop organically, but that doesn't seem to be happing. We have an AM play date tomorrow with my friend Erin and her 15 month old son, Gavin. Maybe she can give me some insight...
Posted by Jenni at 8:58 PM 1 comment:

My very good friend Kate stopped by with an unexpected, but welcome gift for little Oscar. Kate is an elementary school librarian in DC and last week was the Book Fair. Kate picked out several great books for Oscar about friendship, sharing, numbers, and family. Unfortunately, Oscar was Mr. Crankypants while she was visiting, but we are both very thankful for Kate's thoughtfulness and generosity. Who better to pick out books for your kid then and librarian? We have story time every day, and are also working books into our bedtime routine so the new books will be a welcome addition.

Solids are still going well. Today we tried cereal with breast milk and fruit and he liked it! He had peaches and cereal for breakfast and prunes and cereal for dinner. The only down side (for me) is that now I have to pump at least once a day so I have milk to reconstitute his cereal. But he's such a good little eater, I can hardly complain. He's put on a whole pound and a half in the past month, and I think he's grown an inch!
Posted by Jenni at 9:32 PM No comments:

So many toys, so little time 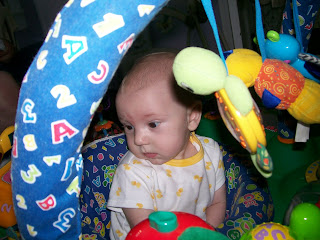 Now that Oscar is big enough for his Exersaucer, I can actually put him down during his waking hours and get some things done around the house. He still prefers interactive play, but he'll sit in his Exersaucer for a good 10-15 minutes. It's pretty amazing how much you can get done in 10 minutes when you know that's all you're going to get.

Solid foods are still going well. Prunes are still his favorite, but peaches are a close second. He's also accepting apples (home made by mommy), squash (also by mommy) and carrots (but only on a limits basis.) I added a some cereal to his prunes last night, but I think I added to much. He hated it. He's also refusing peas, pears, and sweet potatoes, but we aren't giving up. I read somewhere that it can take 14 or 15 tries before a baby will accept a new food!
Posted by Jenni at 3:39 PM 2 comments: 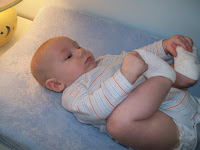 I can't believe I forgot to mention that Oscar found his feet about two weeks ago. And he loves them. They are in his hands or his mouth every morning when I come to get him from his crib. He loves pulling off his socks so he can really get to those toes. He's so smart!
Posted by Jenni at 9:26 PM No comments: 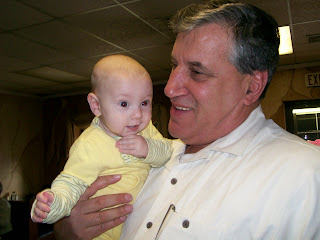 Late last week my grandfather passed away, just shy of his 80th birthday. His health had been failing for several years and I had not seen him in quite some time, but I was none the less heartbroken to loose my Nono. We lived close by and saw him quite a bit when I was younger, so I have some pretty good memories of him, mostly of him holding me and giving me all enveloping hugs. He was a big guy (about 6ft and over 300lbs), so that is a hug you remember. I feel lucky that I will be able to carry his love and his memory with me.

However, as in many families, sadness drew everyone together in love and support. It was nice to see all of my uncles and my cousins in one place. It is funny how much all of us look alike, and how Oscar looks nothing like any of us (a good thing, according to Oscar's namesake, my Uncle Dom.) Oscar also met his relatives, including his own Nono (my dad) for the first time, which was very special and long overdue. I don't think I've ever seen my dad so smitten as he was with his grandson, and as Oscar's smiles and squeals attested, I think the feeling was mutual.
Posted by Jenni at 9:51 PM No comments: