What Comes After No? 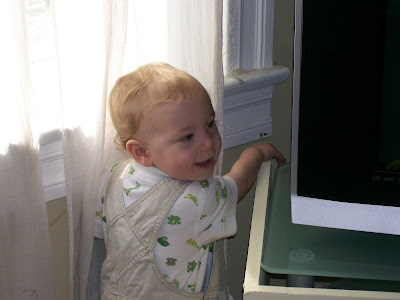 A few months ago, Oscar uttered his first word: Dog. It was momentous, exciting, and thrilling to the ear.

Then came no. NO. And, honestly, I've heard hide nor hare of any of the above words since, except for dog, Mama, and Dada. In fact, some of the words (bubble and dog toy) he only said once and never again.

But, since he'd started with the no-ing, it's like he has no interest in learning or saying any other words. It's all no all the time. I'm trying not to be totally neurotic about this (heh) but I'm a little worried. More about the whole dropping words thing than about the only saying no thing. Saying two words, in addition to Mama and Dada, is not at all uncommon for a 14-month-old. It's more than a lot of them say. Really, that puts him right on track.

But dropping words just reeks of a problem to me. Is it even considered dropping words when they are this young? I don't know. I don't want to Google it because then I'll just end up frantic and convinced my son has speech cancer or something.

He does "talk" a lot, by which I mean carry on babbling in a conversational style. He does this more often than any other kids of his age that I've encountered. And he definitely makes word sounds when "talking," not just funny noises.

I'm trying to decide whether or not to bring this up at his 15-month PE next month. And, since I'm already thinking about it, I probably will.

I know this is likely nothing. Nothing! My neuroses getting the better of me. I mean, he can't possibly say nothing but no for the rest of his life.

Wanna bet he can't say just "no" for the rest of his life? ;-) I'm taking Danny Friday for his 15 month exam and as you know better then anyone, his speaking consists of "AT" and "SHA, SHA". My concern is that he used to say "CAT". He's lost an entire consonant. But I'm not really worried I guess. He communicates (just like another cute little boy I knows.) Soon, we won't be able to shut either of them up! Have a great day. And you can call me "SHA, SHA!" -Monica

Give him time. More words will come. But I totally understand worrying. That's what parents do!

I'm not an expert by any means. But losing words IS sometimes a problem. And sometimes it's completely normal, as they gain new words.

He's still really young to be super concerned, especially since he IS talking. I would just keep monitoring him and wait until he is closer to two before freaking out.

I don't think you have anything to worry about. My nieces and nephew all showed really different patterns of speech development and none of them have any problems. Sanam didn't even talk until she was like 3 and now she is such a blabber-mouth and extremely intelligent. Ask your doc, but I am sure he will just tell you it's normal.