Listless Mondays: Things that are Annoying me Right Now 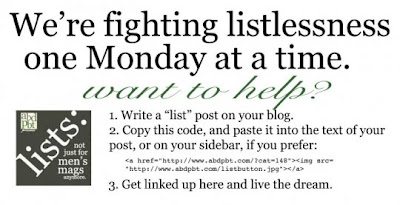 I'm joining Anna's Listless Mondays today, since I too am a lover of lists. So, here are some things that are annoying me RIGHT NOW:
1. Name that baby: We have a name for a girl child, but none for a boy. When we discuss names it goes like this - I suggest awesome name, Nelson rejects; I suggest super cool name, Nelson rejects; I suggest epic rock star name, Nelson rejects. Fine if he doesn't like the names I've suggested, but he could at least come up with some suggestions. I'm due in less than eight weeks here. Lets do this thing, okay?
2. Low hanging fetus: There is SO MUCH PRESSURE I feel like the child weighs like 30 pounds and is about to fall out of my girl parts. Seriously, I am expecting an arm to pop out of my vagina and start waving at any minute.
3. The fuchsia nightmare: Oscar is still not moved because of Nelson being so disabled by his cold this weekend. Next weekend we have a birthday party. I'm beginning to think this move will never happen. Grrrr....
4. Oscar hates me: He has officially decided that he is no longer happy to be caged in the play/living room. He demands to be on free roam in the house at all times. He eschews his toys for knives and razor blades and has been eating glass. Okay, not really that last part but my hugely pregnant state makes it significantly more difficult for me to keep his safe and he rampages through our home. Also, he leaves spatulas and spoons and Tupperware littering our floor and I trip AT LEAST 97 times a day.
5. Oscar's new game: This is a good one. His new game is "eating" things he should not. Examples include paper, cardboard and mulch. Only, he doesn't really want to eat them. He only does it to freak me out. Really. He makes sure I see him putting these things in his mouth and laughs hysterically as I try to get them out. Sometimes, he PRETENDS to put something in his mouth, just to see me sweat.
Posted by Jenni at 1:45 PM

You know Casey is a lovely name. ;)

Our son has never been free to be contained, once in awhile we lock him in his room (with us there of course) but most of the time he gets to roam the house and break everything in his path.
That eat everything in sight game? I think my kid invented it. Acorns, mulch, feathers, dog food, ANYTHING ON THE GROUND IN PUBLIC. Being a germophobe doesn't make it easier to watch and he intentionally does it to f with our heads. Sounds like we have the same kid. At home I don't chase him anymore since the house is mostly childproof and it's most likely something safe-ish. In public, I don't like anything alien going in his mouth. Eww.

I think you should put up a poll in your sidebar of awesome boy names, then WE could name your baby if it's a boy! LOL.

I would DIE if my child ate a bunch of stuff that wasn't food just to get to me. I'm with Casey. I'm a bit of a germ phobe. Ack!

Hah! Oscar sounds like Mini--the more dangerous the toy, the better, and if one can play with it whilst climbing up or down stairs, even better!

Nice list, thanks for playing! You're all linked up.

Jennifer is lovely as well. Oh, sister, sorry about the pressure on your lady parts. I've never had that issue. That's not to make you feel guilty, if anything, I'm quite relieved I've never had all that pressure and fluid and swelling. Oscar is on the move, huh? My littlest one is as well. It's getting time for me to childproof the house again!

I know that name game VERY well. We did that with our second. We had 2 names and she popped out she really didn't look like the other. done! :-) Sounds like you're having a rough time these last few weeks. I know when I hit 30 weeks with my #2 I felt as if I had hit a wall. Hang in there!!!

I thought I was the only one feeling the pressure! I keep worrying about a little hand emerging to wave too.