This past weekend, Nelson and I took Oscar to a playground in our old neighborhood, about two miles from where we live now.

The last time we were there was maybe five or six years ago and we were running our remote control hovercraft over the basketball court. We couldn't remember what the playground equipment looked like at all, and being as Oscar wasn't even a twinkle in our eyes yet, we had no reason to ever notice.

We spent most of our time over at the toddler play gym, but decided to go over to the big kid gym so Nelson could take Oscar down the tall slides.

And that's where we encountered it. Playground graffiti. 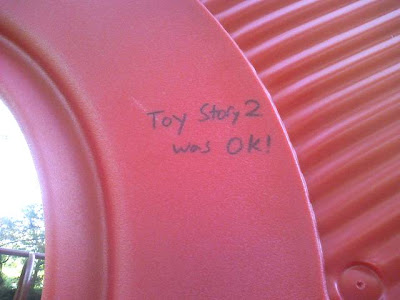 "Toy Story 2 was OK!" It wasn't awesome, it didn't suck; it was just ok. I like this piece of graffiti. It's honest and to the point, but not without enthusiasm. No mincing words here. Just a child-about-town's review of the film. 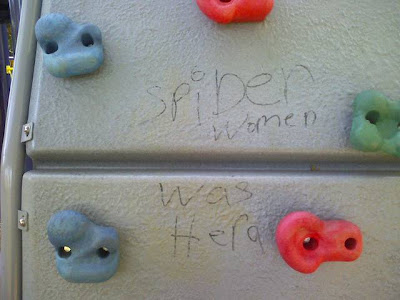 "Spider Women was Hera." Appropriately, this piece of graffiti was found on the rock climbing wall, because where else would Spider Women be playing? Notice that there was not one Spider Woman but MULTIPLE Spider Women. Note the charming improper use of "was" for "were." And likening Spider Women to Hera, queen of the gods, is quite clever. Clearly this tagger is an amateur, but I think she has real potential.

I've been to my fair share of playgrounds but this is the first authentic graffiti I've seen. I like it - these are kids with a message. They have something to say and they're gonna say it.

Now, that is funny. At our playground, the only graffiti reads, "John is a douchebag." Clearly unimaginative.

What? Someone tagged with "toy story 2 was ok"? I am laughing my guts out! I love it!!! Hey chica? Do you need any girl clothes for your little one coming? Let me know. I'll send some your way...

Oh, that is funny! Grafitti and a review! Although I have to disagree with Toy STory 2, I thought it was much better than ok.
Love your masthead by the way!

I remember back when I was in elementary school I wrote on the slide one time...with pencil. I was so afraid I was going to get caught. Yeah that is me, the rebel with a conscience.

That's the best graffiti I've ever seen. We get a different kind around here...

That graffiti was awesome! on our playground, it says things like "Tiffany is a bitch." =(

NOT what I want my kid exposed to , thanks very much.

That's hilarious. Now if you can critique the men's restroom graffiti.....

Fantastic - I wish we had such intellectual and critical taggers round our way. It must make for a very interesting trip to the park.

I found "The cake is a lie" written in chalk today. It was so weird I had to take a picture. Maybe I'll post it tomorrow because I'm too lazy to do anything else.

I got your picture and it's ready to go for Friday. Thanks!

They are fantastic! Heaps better than any graffiti I have ever seen in our playgrounds.