Nelson: Shit, you're right.
Jenni: Nelson!
Oscar (vaguly gesturing at Nelson): Fuck. Fuck? Fuck!
Nelson: Oh, sorry. No, wait. He's not saying fuck. He's saying truck. He's pointing to the trucks outside of the window. (gestures to trucks outside the window behind himself)
Jenni: He's not saying truck. He knows how to say truck. He's saying fuck. Oscar, stop it. Stop saying that.
Oscar (whining and frantically gesturing in Nelson's direction): Fuck! Waa! Fuck!
Nelson: Is he calling ME a fuck?
Jenni (laughing): Maybe. No, wait! He WANTS something. He's NOT saying fuck. He's saying FORK. Nelson he wants your FORK! (Jenni, feeling like Sherlock Holmes)
Oscar (visibly agitated): Fuck fuck fuck fuck!
Nelson: Oscar, do you want my fork?
Oscar: Yeah! Yeah! Fuck! Fuck!
Jenni: Pronounced like a true Italian! I guess we'll have to work on that one. And our language. 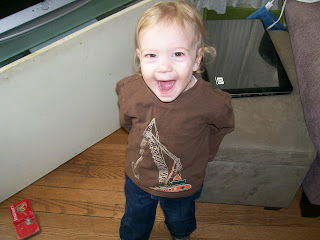 Oh that is hilarious! At least it wasent in some fancyy resturant with the in laws?! : )

A friend of mine's little girl used to yell firefuck firefuck! every time she saw a firetruck!

ha! I would have been laughing too, even though it's not the right thing to do in those moments!

Speaking of which, I need to stop calling the dog a "dumbass," 'cause I just heard Hank saying, "dumbask, dumbask!"

HILARIOUS! I remember when C was 4 and he told G "Eff off". I could have DIED.

Phew! We've been through the "did he just SAY that?" stage. So far, Graham has only said it once when someone ran a stop sign and almost hit us. Then he started chanting it over and over until I convinced him that I said "phone" so he yelled that instead.

It's so rewarding to finally figure out what the hell they're saying, no?

Bwahhahhaha! That's fantastic. I need to tone down my language, but probably won't, so we'll be having that same conversation with X in about 6 months.

Oh what a funny story!!!

what a cutie!
I gave you an award btw!

The classic story around my house growing up is when I mortified my mom in the middle of Shoney's screaming "I want a fuck (fork)!" and she was going "Ok..her is your FORK FORK FORK"

Oh crappiola! It's not like Oscar and Danny imitate each other or anything. Oh dear! ;-) -Monica

This is hilarious! Mini hasn't said a bad word yet, but it's just a matter of time.

That will go down in Oscarelli history! Priceless!

That went over a lot better than when my kids repeat something I said.

Oh, that's really funny. Fork is a tough word. To this day, I mean to say fork and instead I curse up a storm. :)

This post was featured on the Connoisseur du Jour Sunday Funnies