Even though this is technically Miles William's second Christmas, it feels more like his first because he was only nine days old last year. He's not really going to get it, and Oscar will likely open his gifts, but I did decide to do it up for him anyways. This is really our first year of Christmas Magic, so even though M Dub won't get it, Santa is still going to treat him right. All links go directly to Amazon.com, and if you purchase via these links, I get a piece of the action (albeit a very tiny piece.)
Miles presented a challange because I needed to find things for him that we don't already have. We've got a milling xylophones, stackers, nesting cups, blocks, etc. that one-year-olds love, so I needed to be a bit more creative.
Miles loves putting things together, so I got him these Alex Jr. First Pops Pop Beads

. Looking back, I paid way to much for them, but was totally wooed by their pretty packaging and all their fancy schmancy awards. 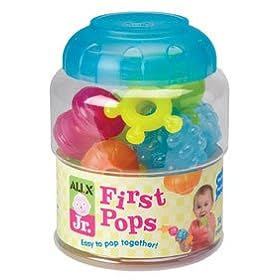 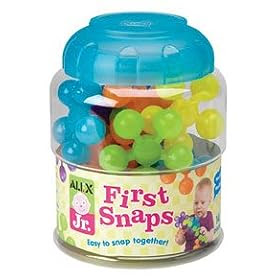 Cute, right? But, I could have gotten something comparable for cheaper so I'm kind of kicking myself. So he better love them (he'll likely never touch them.)
Next, how cute are these International Playthings Hide'N Squeak Eggs 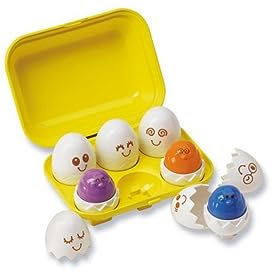 Miles loves, loves, loves put-and-take and nesting toys and these cute little eggs are a different spin on those types of toys. I've had my eye on these since Oscar was a baby, but I just never though they were his bag. I think Miles will love them (more likely never touch them.)
Along the same lines, I got Miles this Vtech - Explore & Learn Helicopter 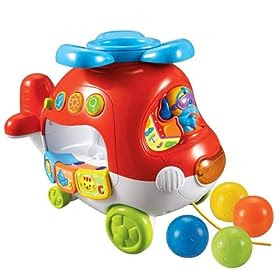 It has balls that go in and out and wheels so he can drive it and it's "educational." It also makes a lot of noise so I'll really regret buying this one (and Miles will LOVE IT.) Best thing about it, though, is that I got it for a song. It was on super sale at Tar.get and I only paid $10 for it.
Miles is really interested in whatever Oscar is interested in, and Oscar is interested in trucks. I found this Playskool Wheel Pals Cushy Cruiser Pickup 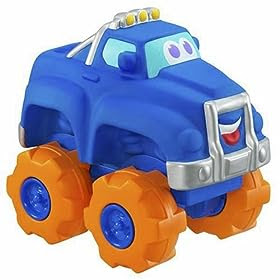 This truck is perfect for a one-year-old. First, it's soft. Really, really soft. He can bite and and fall on it and not do any damage to himself, and he can really grab a hold of it. It's also a good size - he can grip it with two hands and push it around, but it isn't so giant it'll take up my whole living room. His Gigi got him the bus model of this toy for his birthday and he loves it. Also, I got it for only $15 at the Tar.get, so another deal.
I also got Miles this Infantino Matching Colors and Textures Puzzles 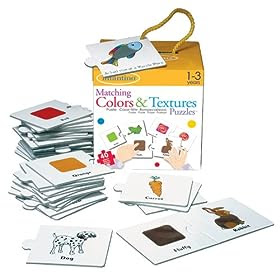 The concept seems a bit advanced for a one-year-old, but he'll love the textures and probably Oscar will steal it anyways.
Miles really loves balls (as do all babies his age) and he really loves putting things in his mouth, so I got him these Edushape See-Me Sensory Balls 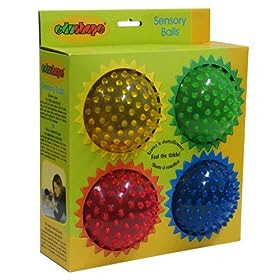 They are nubby and they give quite a bit, and should fit right in his hand. Kind of teething balls. I think he'll love them. And there are four so when he looses one under the couch it can easily be replaced and I don't have to get covered in dog hair looking for it. Score!
Posted by Jenni at 7:00 AM

Awesome gift list! He'll probably love all the packaging/boxes/containers more than the actual toy...at least that's what has happened with Gia. We as parents spend so much money on toys and the kids want to play with things like empty boxes and the nesting measuring cup set in the kitchen cabinet. Happy holidays to you and your family!

I have a similar problem with Bruiser. He's not really goinmg to get it but I don't want to leave him out. We also have to think of his birthday next month. Good for you thinking of Miles. Have a great Christmas.

We have nubby balls. Heh, the kind you play with. The plastic ones, get your mind out of the gutter.

I got Reg one of those sensory balls for his birthday - HUGE success. He can crawl around the house holding it. Of course, the older two love it too...