I've already waxed poetic about my love of holiday shopping, and since so many of my blog readers have kids close in age to my own, I though I'd steal a page from Swistle's book and share some of the things I've purchased for my kids and niece. Edge of your seats, right? (All images borrowed from Amazon.com, where I bought most of this stuff. Also, I've been in no way payed/cajoled/etc. to talk about these products, but I will get paid if you click the links and buy the products.)
The first gift, his "main gift" I guess I'd call it, is the Sprig Toys Discover Rig 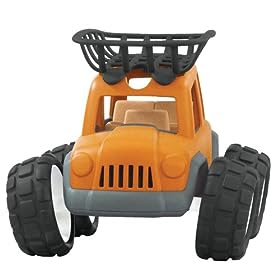 Man, is this thing cool! It's made of an eco-friendly wood composite, does not require batteries, and it comes in minimalist packaging (score, score, score!) You put a little man (or woman) into it and as the kid pushes the toy, it tells a story. And, they can push it with their hands, or their is an attachable handle so they can stand upright and push it. It's a great size too, and there is a little basket up top for Oscar's treasures. Perfect for my vehicle-racing, treasure-seeking little boy.
Next is the Green Toys Tea Set 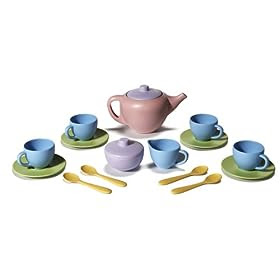 My 2-and-a-half-year-old is really into pretend play right now an he loves to cook and serve food, so I though a tea set would be perfect. It's made from recycled plastic, which I think is cool, but the real reason I bought it was because I wanted a tea set that skewed a bit more gender neutral and I think this one fits the bill. (Swistle also considered this for Henry, but dismissed it because of the potential mess factor.
Oscar loves, loves rockets and when I found this International Playthings iPlay Stomp Launcher Pump and Rockets 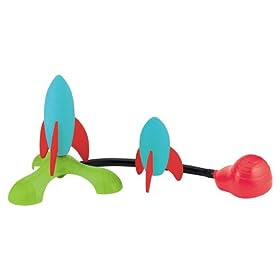 Rockets that Oscar can launch by stomping on them? Are you kidding me? What two-year-old doesn't love stomping? And, we can launch this rocket indoors so it is a perfect rainy day toy. I think we'll have lots of fun with this one.
This next one is my best bargain find, the Sprig Toys Eco Recycling-Truck [Amazon Frustration-Free Packaging] 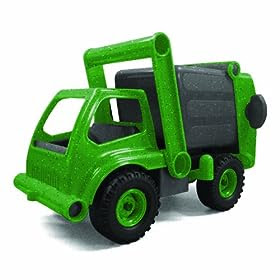 I was looking for a Sprigwood toy for Miles when I found this bad boy, on sale on Amazon for $10! I got one for Oscar, one for Miles, and one for my niece Ella. There was a limit of three (!!!), but I'm sending Nelson online to buy three more for; one for Danny (hey, Monica & Susanne, guess what Oscar's giving Danny for Christmas!), and also for my friends' Diana and Pam's kids who also love cars/trucks.
The LeapFrog Fridge Phonics Magnetic Alphabet Set

is one I saw on Swistle's Henry Shopping Post and it caught my eye because she said it was $15 on Amazon and I'd been eyeing it in Tar.get for $20:

I smelled a deal! An educational deal at that. So, I went to Amazon and put it in my car for later. But! The next day it went up to $20! Three days later, back down to $15! Then $20 again! Blast! So, it went back down to $15 yesterday and I just snagged it.
I got him a few other little things, some dress up hats from Ikea, a few books, a couple of puzzles, and that's about it.
I've been vacilating about this, the Melissa & Doug Slice and Bake Cookie Set 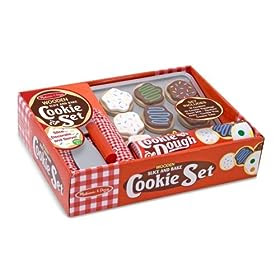 My hair stylist has one of these at her salon and Oscar adores it, and so do Swistle's* kids. It would also go great w/his tea set. The reason I've been going back and forth is the price. Sometimes Amazon lists it as $20, some times at $14. I'd spend $14, but not $20. So, if it goes back down, I think I'll get it. If not, than not.
*Linking to Swistle a bajillion times to make up for ripping off her shopping post ideas.
Posted by Jenni at 6:54 AM

Toys are much cooler these days, but then I remember when "the" hot toy was Cabbage Patch dolls. Both of my older kids had one, and they were only slightly harder to obtain than one of those silly Zhu Zhu pets.

Jan from the Sushi Bar

Thanks for the Sprig toys rec. I have never seen those--just scored three recycling trucks.

Great deal on the trucks!
Sprite's list is very small this year, because she got one big ticket item and if I have to sell the rest of her toys in order for her to play with it, I will. Kid better not test me... :-)

the link on the green truck goes to the launcher... do you still have the link? that thing is awesome!

Cool toys. We are going light for Bruiser but Turbo has asked for Lincoln logs and a race track--Hot Wheels. Hope your boys enjoy what they are getting.

Okay, that rocket thing is awesome. If I buy it from the Canadian Amazon, do you still get paid??

I did most of my shopping on Amazon as well (since they ship to APO military addresses) and I was in L-O-V-E with the Melissa and Doug puzzles. I bought 3 of them for KiKi.

Very cool Jenni. Danny will love it! And speaking of Christmas presents, thanks for letting us know about your Amazon wish list. I'd never even heard that before. I think all of our kids are going to have a Merry Christmas! The rocket launcher is awfully cool. We may have to look into that for our little stomper too. -M

I want to come to your house for Christmas!!

Stomp rocket? Are you kidding me?!?! Must have? Would a man-size foot work on that?

I'm jealous of Oscar and wish you were my mom! Toys have come a long way since our childhoods. Hope you're having a great December!