A decision I don't want to make

I think this is the end of the line for Nebo.  He jumped over the neighbor's fence again today after he'd been out there less than a minute.  The neighbors had not locked their fence so he came around to the front of the house to come home and there was a man directly in front of our house walking his kid to school.  Nebo snapped at him (the man, not the kid) and then ran back to the neighbor's yard.

All this happened in the span of about 30 seconds, because as soon as I realized he was not in the back I came to the front go get him.  We have a glass front door so I saw him coming home and saw him snap at the man.  It was not the guy's fault.  He was just, you know, walking his kid to school.  And Nebo was scared because he couldn't figure out how to get home.

Because of Nebo's history, there are four options at this point, as I see it:

1) Pay thousands of dollars for a privacy fence between us and our neighbors;
2) Take Nebo out in the backyard on a leash to use the bathroom several times a day;
3) Return him to the no-kill shelter where we adopted him;
4) Have him put down (last resort, obvs.)

We don't have the money for a new fence.  And that's more a long term solution anyways.  We have to go through our town council and get approval; get approval from our neighbors; get a building permit; hire a contractor; wait a million years to get the effing thing built. Months, even if we did have the cash.

Taking him out on a leash ever time he uses the bathroom is an option, but not a very good one.  I can't really leave my kids unattended for several minutes while Nebo does his business.  And I can't very well have preschoolers and a toddler out in the yard while I'm waiting for Nebo to take a crap because you know the kids will be all up in that business.  Also, he won't be able to play with Valentine and that sucks for both of them.

Returning him to the no-kill shelter is a real option.  When we adopted him, as part of the contract they said they would take Nebo back if we could not keep him for any reason, and it even stipulates that he should be returned to them and not given to another owner or another shelter.  But I just keep thinking that he's never going to get a new home, you know? Because who is going to adopt a biter? No one wants a dog with a history of biting.

The thought of putting him down is just too awful.  Nebo is only eight years old, so he still has another 2-4 years left on his life (on average, larger dogs live 10-12 years) and he is otherwise healthy.  But, he has a history of biting.  Yes, I trust him around my kids but I don't trust him around strangers, or even my neighbors.    That's just not okay.

So, I'll be taking him out in the yard on his leash until we make a decision.  Maybe that will not be as inconvenient as I think?  It still doesn't seem like a real solution, though, because what if Nebo gets out again? What if he jumps the fence while my neighbors are out in their yard and bites someone?  Then we will have to put Nebo down for sure and I'll feel guilty about not returning him to the shelter when I had the chance.  But, the shelter?  I mean, it is a nice shelter, but to have to live the rest of his life there, away from Valentine who he worships and adores?  How awful for him.  Possibly a fate worse than death.

Nelson gets back from Texas tonight and we're going to think about it this weekend.  This is not a decision either of us want to make.  We love Nebo.  He is a part of this family. 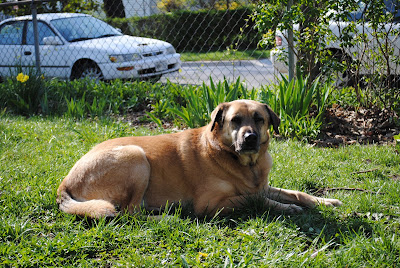 Can you get a lead-on-a-stake in the back yard? If you get a long enough lead, you may be able to attach Nebo to the lead from pretty close to the house; and then he'll be able to roam the yard on a long lead that is staked into the ground. He can play with Valentine and be outside, but be safe from fear. Or maybe you can have a dog run, posted between two trees or two segments of your fence (like a hypotenuse to the corner of the fence)?

Oh Jenni - I'm so sorry to hear about this situation! Poor you and poor Nebo. I'm hopeful that something will work out.

Looks like the anonymous commentor has some good ideas, too.

I hope this works out for you!

What an awful decision to have to make. I agree with Anon, can you try a tie out stake for a little while? If he pulls the stake out of the ground you could attach it to something strong like a fence post or tether it to the side of your garage or house.

Still if you decide that he can't stay and he becomes too much of liability, don't feel too bad about returning him to the shelter. It's ok to admit that it didn't work out while knowing that you tried your best.

I, too, was going to suggest the stake thing, or better than that, a dog run or zip line (dig two tall poles as far out as you want and run a taut line between them, then attach your dog's leash to that line so he can run back and forth)

I'm so sorry, Jenni-that stinks. I was actually coming over here to suggest the dog run idea. I hope you guys are able to work this out.

I vote for the dog run as well. Nebo looks exactly like the dog we had when I was growing up, and he was always jumping the fence as well, and was not exactly friendly with strangers although he loved us, his family, to death. I think part of it is that some dogs are just very territorial and protective of their families and they don't understand that they have boundaries.

Wow, that IS a tough decision! None of the choices are great either. I hope you both are able to decide something that will feel best for the cute little biter.

I was also going to suggest a run. We had one for our dog growing up because even though we had a fully fenced yard he was 1/2 daschund and would dig under the fence and run away.

Wow, great minds and all that...I wanted to suggest a dog run also :) I like the zip line idea though, I bet that would be easier and cheaper to implement and then if that works you could consider a dog run for both of the dogs to keep them in your yard.

Oh hon, I'm so sorry. That's a difficult situation to be in.

The dog run is a reasonable option. You can build one out of chainlink for reasonably cheap or buy them pre-made. If you do go that route, make sure there's a 'lid' on it. If he's climbed a fence before, he'll do it again!

(I know that one from experience.)

I hope you can keep him - he loves you guys and Valentine, I'm sure - but you have to do what's right for everyone's safety.

Poor Nebo. Poor you guys. He is identical to our dog Bailey but Bailey is a big dumb lump. Our other dog is the one who acts like Nebo and just having her around adds 1000x the stress on top of the other shit we're dealing with too.

I like the idea of putting a lead in the backyard. Or a run that you could snap on his collar and let him out so he can run around and snap him back on when he comes back in. Good luck, hard decision.

Oh man, this is tough. I agree that the dog run is a good idea. Poor guy. Poor you.

I'm so sorry. That does suck. Before we put in our fence, our dog jumped our shorter fence all the time. So we put a zip line up between two trees (really high up) and hung a tether from it, so she could run around most of the yard, but was still attached to the leash. They sell them at pet stores. It gives them more leeway than a leash or a tether tied into the ground and it won't get stuck on things or wrapped around things. It worked really well for us. It was a pain, but it worked.

Oh, Jenni, I'm sorry. I really hope you think of something. I can see how much you love him. It's the way I feel about Blue and Harry. We finally had to invest in a fence to keep them put, but I refused to give them up because I was worried that the next owner wouldn't take care of them.

I have used a zip line for the dog I had when I was married. He was a fast runner and would get away in an instant. We always worried that he would run into traffic! We used an old clothesline that was in our back yard. Our Bombur Dawg could run as fast as he wanted from one end of the yard to the other and all we had to do was watch and enjoy :) Good Luck!

Zip lines and tie outs are really good choices and really cheap too :)Fatty learned to jump the fence just this afternoon so a zip line will be bought tomorrow morning! My stupids don't bite but they will lick you to the ground! Good luck sweetie!

I would put him on a lead in the yard. I have had to do that before. And maybe eventually you can get one of those invisible fences. I hope you don't have to get rid of him. Good luck!

That sucks. I hope you don't have to give him up.

When our fence went down a few years back during a hurricane I had to leash walk both dogs in the yard and it was a pain in the ass, but you get used to it surprisingly fast. They just have to get used to not going out as often as they like. We had a lead that we kept attached to one of the patio posts but they often got tangled so it wasn't really convenient to leave them on it for very long.

Yeah, that does suck. Whatever decision you make, try not to eat your heart out about it. Your reasons are good ones.