So, how do we feel about this sweater?

You may have heard the East coast/mid-Atlantic/southeast is experiencing a wee bit of a cold snap, as in "SNAP!  Bitches, it's cold out here!"

So, you know, BRRR.
Now, DC gets cold.  Not freeze-your-eyelashes-Canada cold (admittedly Keely is way colder than I am right now), but respectably cold.  It's not uncommon for temperatures to be in the 20s or the high teens around here, but not until January or February.  Our Decembers are usually closer to the mid 40s.  We're dealing with 20s and 30s and lots of icy wind, so again, BRRR.
I somehow forgot to buy Oscar any appropriate cold weather clothing this year.  I mean, he has jackets and hats, but no sweaters or fleeces.  Stuff that you wear indoors.  We live in a old, drafty house, and I keep the thermostat on 67 (yes, BRR) so sweaters and fleeces are a must.  Miles has plenty since he's in Oscar's hand-me-downs from last year, but little Oscar is freezing his patootie off.
He has a couple of things; a dinosaur sweatshirt I bought him for $3 at Tar.get; a hand-me-down fleece; his dorky moose sweater; a red sweater from last Christmas that's only a smidge too short. He certainly needs more though and while my mother-in-law and my sister usually get the boys some clothes for Christmas, we can't wait.  It's cold NOW and it's supposed to be a cold winter.
This has lead to sweater shopping.  I had seen some sweaters in Tar.get but they were thin and not that cute and acrylic.  Acrylic pills and these sweaters need to get through two kids, so the sweaters need to be 100% cotton or a wool/cotton blend (wool is too itchy for them on it's own.)  I went to ON online and they are having a BOGO on sweaters right now, so I got him four.  They are those thin French-style sweaters but I'll put them on him over a T-shirt and a long sleeved shirt, so he should be fine.
I also found another sweater.  I can't decide if I love it or hate it. Here it is: 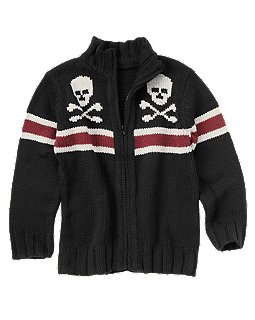 So, on the one hand, I like the idea of a zippered cardigan.  It makes layering even easier.  I can put this on him over a long-sleeved tee, and if he gets hot he can take it off himself.  The mock turtleneck style of the collar looks good on Oscar because he has a long neck.  I like the look of the bottom of the sweater; it looks like it will hang just right and not blouse up at his waist (Oscar is a skinny kid so that blousing look makes him look like he has stick legs.) I like that it is black because black goes.  I like the red stripe. I like that it's on sale.
So, it's a cotton/acrylic blend and I'm pretty against that for previously stated reasons, but all of the positives listed above may rule that out.  It is on sale, but not on clearance.  But I'm really not sure about the skulls.  Do I love them or hate them?  Now, if you have a little boy, you know that little boy clothing is overrun with skulls and crossbones these days.  It's a pirate thing.  Normally, I think that it's pretty cute.  I just don't know if I can get behind skulls and and crossbones on a kitted sweater.  It just does't seem to "go." Then, on the other hand, what I kind of LIKE about the skulls is that they don't seem to really "go."   It's like taking scary looking skulls and putting them on a sweater and putting that sweater on my cute little boy makes that sweater kind of hip.
So, how do we feel about this sweater?
Posted by Jenni at 8:00 AM

I would wear that sweater because of the skulls. Would I put a kid in it? Probably not my first choice.

I love it. Like you say, the chunky knitted quality puts the skulls in a different context. I think it's cool.

Was that ON? Because now I want one!

Skip it. Too trendy (skulls are fine, but enough already!) and you'll come to regret the acrylic blend. If it were on clearance for $10 or less, I'd say yes. Otherwise save the cash for the after Xmas sales and get them a sweater you (or they) really like.

I'd love it more without the skulls, but there's something still hip about it. I'd get it if it were under $10.

I love it! It just needs a matching toque.

Wait, skulls are on everything? Must be an american thing cause I can't find little-boy stuff that's skullified anywhere. (the 8-10 yr old set, sure, but not little guys.)

I love it, anyway.

I love it, I don't know why but I'm all about skulls on kids. People must think I'm morbid because they both seriously have a ton of skull things.

We're freezing our asses down here too. Well, not literally but for us we are. I'm talking down in the 30's at night and 40's by day. And stupid assed ME packed all of the kid's warm stuff in the POD because I thought we'd be moved and unloaded by now. So I've been layering them with pajama shirts, t-shirts, sweatshirts and then their jackets.

LOVE it! And I agree with Keely - haven't seen much skull stuff for preschoolers around these here parts, and I WORK with preschoolers. So you can consider me something of a preschool fashion expert. ;)

I have a teenage son who also often sports skulls and crossbones, but not because of pirates. Frankly, I think it's stinkin' cute - get him an eye patch and a plastic sword to go with it!

The Crepes of Wrath said...

I'm ambivalent. At this point, I would buy my son a Budweiser sweater if he promised to wear it--he's super picky about texture, color, sleeve length and what position the moon is in that particular day.

For me, it'd depend on how cheap it was. Cause for some reason, I don't love the skull motif. But, a boy's gotta keep warm!

Wish we lived on the same continent, cause girl I could give you some hand me downs!

I LOVE it. I WOULD put my kid in it. If YOU don't buy it immediately and put it on your kid, I'll be upset.

It's a fun sweater, i think! Todays' high was 17 degrees in North Carolina!!!